Many of you probably consider an Apple-Verizon deal the second coming of the iPhone. Perhaps you’ve suffered on AT&T since June 29, 2007, or maybe you’ve been biding your time with that dilapidated Motorola RAZR, waiting for the day the iPhone was to be liberated. Well, that day has come, so we did your Verizon iPhone homework for you to see how the carrier compares against AT&T, besides offering a potentially more reliable network.

I’ll break down the carriers’s voice, SMS, and data plans separately, since there’s a lot to digest here. As the carriers offer so many voice plans in both individual and family flavors, I’m only covering the first three of each, in order to keep things simple. Besides, if you need more than 1500-2000 minutes, you’re probably used to doing some extra homework anyway.

The carriers are neck and neck when it comes to their introductory voice plans for individuals, starting with 450 minutes at $40 per month and pacing each other up through the “unlimited” tier, which you can see below.

Family plans are where things get more interesting. Even though Verizon is the nation’s largest network by sheer subscriber numbers and it offers the same “call anyone else on our network for free” feature, the abundance of minutes on its voice plans here seem to assume that families are frequently going to call non-Verizon customers.

AT&T’s family plans start at 550 minutes for $60 per month, but Verizon’s begin with 700 minutes for $70, and head ever more upwards from there. Keep in mind, these plans include the minimum two lines to qualify as family plans, and both carriers allow up to five lines on a family account.

Note that Verizon and AT&T differ on SMS and data plans as well. While both let you add text messaging plans starting at $5, Verizon gives you 50 more messages for its base offering; past that, the companies differ in how fast they scale the number of messages in terms of what you pay, so the best deal will vary depending on just how much texting you do.

It’s worth noting that SMS plans are optional, but who buys a smartphone these days and doesn’t use text messaging? It’s not like you’re actually trying to make phone calls, right?

Data plans, on the other hand, are required for smartphones by both carriers, which is where Verizon’s current plans may have an advantage over AT&T. Plus, unlike text messages or voice minutes, neither Verizon nor AT&T offer bundles for data; each phone has to have its own data plan. You may recall that AT&T dropped its unlimited smartphone data plan in June last year in favor of two tiered options, and Verizon introduced its own tiers in October, though it held onto an unlimited data option.

However, Verizon declined to say whether the existing smartphone data plans that it offers will also apply to the iPhone, saying only that it would announce data package pricing at a later date. So while the chart below shows the network’s current pricing, keep in mind that it’s very possible—if not likely—that iPhone data packages will differ. 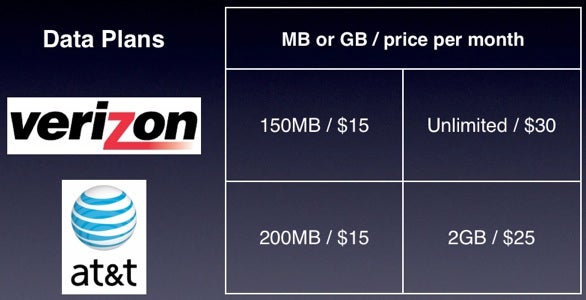 It’s also worth noting that Verizon announced its version of the iPhone will offer the carrier’s increasingly popular mobile hotspot feature, which lets smartphone users share their device’s 3G network connection with up to five devices via Wi-Fi. While this service usually costs an additional fee, Verizon also didn’t specify what it would charge iPhone users for the privilege. AT&T, for its part, currently allows tethering to one computer—not, for example, an iPad—via USB or Bluetooth, for which it charges an additional $20 per month.

Verizon claims that it “covers approximately 290 million people,” while AT&T boasts that it covers “97 percent of Americans.” You can look at Verizon’s interactive coverage map as well as AT&T’s map, but since Verizon is the country’s largest network and AT&T is a close second, it’s going to come down to your personal experience. This is one place we can only do so much of the homework for you; you might need to do a little legwork to make sure Verizon works where you need it.

Verizon or AT&T may show your neighborhood or city blanketed, but it’s still possible you won’t be able to get a signal in places that are important to you, like your basement or your office downtown. PCWorld’s second 3G wireless performance test, performed around the U.S. last February, should be useful, especially if you live near any of the major metropolitan areas included in the review. But I encourage you to talk to some Verizon- or AT&T-toting friends in your area before jumping into a contract for the long haul. Or, alternatively, you could do your own personal wireless performance test by signing up for an iPhone and running around to all the places you want to check out within Verizon or AT&T’s 30-day return policies.

The minimum cost for both Verizon and AT&T with data and SMS plans is almost exactly the same, with a total individual plan price of $60 on both networks (again, this is assuming Verizon’s current data plan offerings—that price is subject to change). Things get more interesting once you get into the family plans, as Verizon offers more minutes than AT&T, but charges $10 to $20 more, depending on the voice package. Still, if you’ve been suffering dropped calls on AT&T or simply prefer Verizon, that may be an insignificant price to pay for what the carrier boasts is a more reliable network.

And, of course, we’ll have more plan details in the coming weeks, as Verizon still has to detail its data packages, including the charges for tethering and mobile hotspot.

Updated at 11:12am PT with a new chart to reflect that Verizon offers the same unlimited family text messaging plan for $30 that AT&T does.